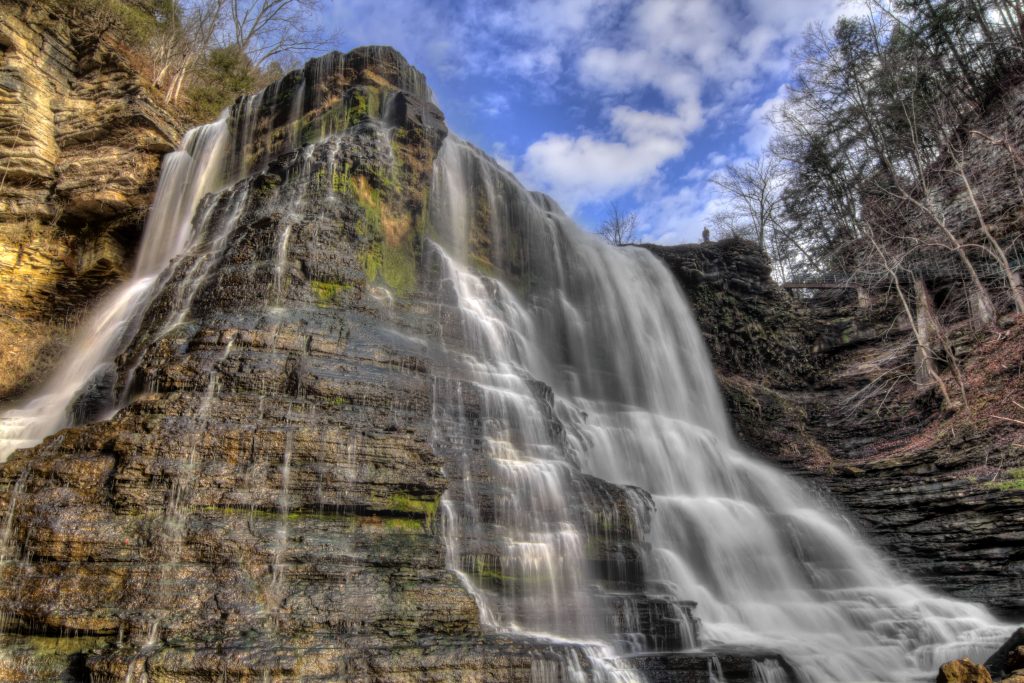 Burgess Falls State Park is a perfect location for adventurers looking for spectacular waterfall views without a long trek. The park is a 217-acre day-use park located on the Falling Water River near Cookeville, Tennessee. Its location along the eastern edge of the Eastern Highland Rim results in its geologic features of sheer bluffs, waterfalls, diverse forests, and narrow ridges. Known mainly for its four waterfalls that cascade from over 250 ft, the park attracts visitors seeking scenic views, moderately-distanced hiking trails, and a good waterfall shot for their photo-book.

The land where the park sits was originally populated by Cherokee, Chickasaw, Creek tribes who primarily inhabited the land as hunting grounds before being displaced by a gristmill and sawmill operation on the river in the 19th century.

The falls are named after Tom Burgess, whose family provided settlers with lumber and meal from the mills. From the mid 1920s-1940s, Falling Water River was used to generate hydroelectric power for Cookeville. In 1973, the area was designated as a state park, granting protections for its aquatic and forest habitats. Window Cliffs Natural Area is a nearby area also managed by Burgess Falls State Park and offers more options for hiking and scenic views.

Burgess Falls offers two trails for those interested in observing the waterfalls and accessing beautiful views. The trails range from moderate to difficult.

The River Trail is 1.5 miles roundtrip and is marked as difficult and strenuous. The trail takes visitors past the four waterfalls in the park as it descends in elevation (ascending on the way back up). The last of the four falls stands out as the most notable in the park, plunging more than 130ft from the river into a gorge and making for breathtaking views.

Visitors are permitted to fish along the river and can catch largemouth and smallmouth bass, as well as bream. The best fishing in the park is located below the dam main waterfall and at the park’s fishing pier. There are no boat access areas in the park; fishing must be done off of the riverbank or designated pier.

Located 8 miles from Burgess Falls State Park, Window Cliffs State Natural Area is a 275-acre day use area managed by Burgess Falls. The area most notably features a prominent geological clifftop feature: a narrow ridge of stone that hangs above the neck of a meander in the Cane Creek. The natural area was designated as such in 2017. While they are both under the same management, it is important to note that Window Cliffs and Burgess Falls are located in different areas and cannot be accessed from one another without driving.

The natural area features one hiking trail that takes trekkers along the cliff features for spectacular views. The trail is 5.4 miles roundtrip and considered strenuous and difficult. Visitors should plan on taking about 3 hours to complete their hike if they wish to hike the trail roundtrip.

The trail consists of almost 20 creek crossings, making it impossible to complete in high water situations. Visitors are advised to check weather forecasts and be aware of heavy rain that may have resulted in high water along the trail and its creeks. Visitors should also plan on packing light and wearing appropriate clothing and footwear for their hike.